With Thanksgiving taking place this month, the hunt for scrumptious new recipes is on our minds — who doesn’t want the best food possible for their feast? We decided to search our Special Collections to find some of our most interesting recipe books.

Good Thyme Cooking with Karin Orr (1996) is a recipe collection compiled by Karin Orr of WGVU-TV 35 & WGVK-TV 52, Grand Valley State University’s TV stations. The book includes recipes from chefs who appeared on the show, as well as contributions from the staff members and Karin herself. This collection is broken down into thirteen chapters so that the recipes are easy to find. Each recipe has the ingredients broken down and a detailed description on how to complete the dish. On the ones that Karin provided, she adds a comment about where the recipe came from or how she has modified it.

Adventurous Eating in Michigan by Marjorie and Duke Winters (1987) is both a restaurant guide and a cookbook which explores some of the best places to eat in Michigan with chefs who are “young and enthusiastic” as well as talented. Their “fair” way of determining a great restaurant was whether the restaurant was “successfully meeting its own objectives”, which ended up including 147 restaurants. With each restaurant listed comes a description of the restaurant, typically at least one recipe from the chef, and a number which corresponds with the numbering on the map so the readers can know where each restaurant is located.

The Alice B. Toklas Cook Book (1954) is one of the bestselling cookbooks of all time, even though the book is as much an autobiography of her life with Gertrude Stein as it is a cookbook. As the introduction to the Folio Society’s edition of this book states, Alice “mixes recipes, anecdotes, and reminiscences, and her guileless art is to move from instructive recipe to its original mise-en-scène”. The recipes were influenced by Alice’s upbringing in America and her many years of living in France, where most of her cooking was done, as well as some recipes given to her by her friends. This cookbook is especially famous for one recipe in particular, a cold dessert called “Haschich Fudge”. 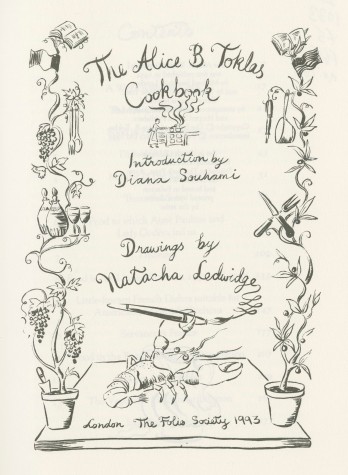 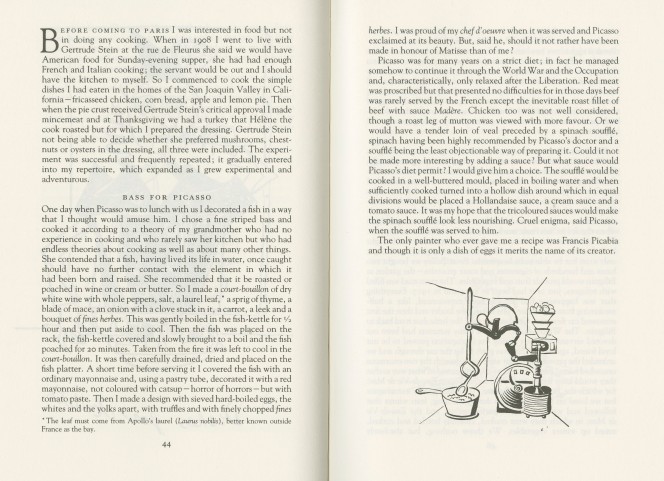 Favorite Dishes (1893) is a celebrity cookbook that includes over 300 autographed “prized” recipes and 23 portraits of the Board of Lady Managers from the Woman’s building in Chicago. The idea for this cookbook was for it to be charitable; this book would be offered to women of “limited means” who could sell the books in order to afford a visit to Chicago’s world’s fair. As the University of Illinois Press describes, this cookbook provides “an unusual and interesting look into the way early women’s movements used conventional means to manipulate their way into a man’s worlds, and provides insight into how food, women, and American attitudes were changing at the end of the century” (2018). 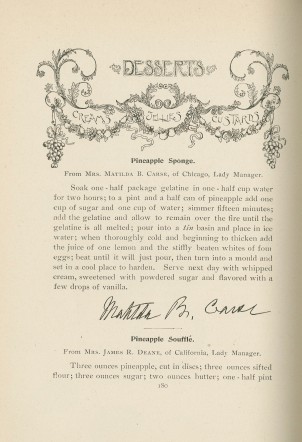 Our Michigan Ethnic Tales and Recipes (1979) was put together by Carole Eberly who was inspired by her Czech grandma to love food and to think about the cultural connections that appear in food. Cooking is one way that people have always come together, which is one of Carole’s goals with this recipe book. This book provides glimpses into 20 different ethnic groups with both a story — gathered from either interviews, first person accounts, or historical pieces —  and some recipes that relate to that culture.

Sherlock Holmes Cookbook (1976) is introduced as a way for “Sherlockians…to recapture the charm of Sherlock Holmes’ London” by exploring the food that Sherlock and Watson would have been eating. This cookbook is also advertised as being “mostly” for pleasure and as a way to “escape…to that place where it is always 1895”. Within each section of the book, the recipes are laid out with ingredients —although not always the exact measurement of each ingredient— and instructions on how to make each dish.  Some prior knowledge in cooking seems to be expected. With recipes for every type of meal, including tea time, the reader can truly get a glimpse into the eating aspect of Sherlock’s and Watson’s lives.

To view more items related to all things cooking in our Special Collections and University Archives, visit Seidman House located on the Allendale Campus near the Lake Halls.

On Veterans Day, November 11, 2018 we show our respect and gratitude for the service of our country’s veterans. This year’s celebration is a little more special than past observances, as it marks the 100th anniversary of the ending to World War I.

On this occasion, we invite you to explore these postcards from the Philo Holcomb, Jr. World War I postcard collection. Holcomb was a native of Atlanta, Georgia who served in the U.S. Army from 1918 to 1919. After the war, he traveled extensively in Europe, collecting numerous postcards, travel guides, and maps. 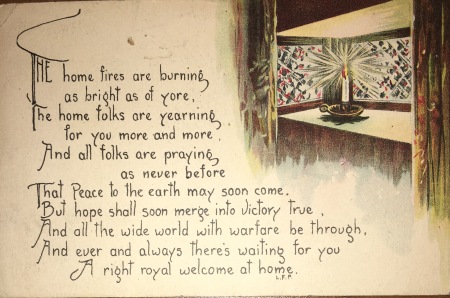 World War I consumed the better part of Europe between the years 1914-1918. Its battles were fought with a brutality that was never before seen. The Great War took a significant toll on the men who fought bravely.

These men were sons, brothers, fathers, uncles, and nephews. Many of them had a family waiting for them to come home. While the soldiers were abroad fighting, the most common method to communicate with family, friends, and acquaintances was through letters and postcards.

Millions of postcards were created between the years of 1905 and 1915. This time period is known as the ‘golden age’ for postcards. In Germany alone, there were about three million printed. In some ways, communication by postcard is similar to today’s use of social media such as Twitter, Instagram, or Facebook. Postcards have a limited amount of space for writing and picture to tell a story. That story could be about the place the person was currently stationed, a place someone visited, or just to reassure loved ones that they were okay.

One could analyze this piece–featuring the French character Rintintin as well as the writing on the back of the card–and see this as him being “jerked away” from focusing on his duties in the Army with his interest in the women of Europe. You can see this again in the postcard below with Philo’s friend Bill having accidentally chased away a girl. Another example how postcards have the power of image and words in a short small package.

Postcards printed during this era sometimes reflected the politics and popular sentiment of the day. During the World War I era, humor became darker, illustrated below in the text of these British postcards.

Some Germans who opposed the war expressed their defiance through art. In the postcard below, one could interpret that it is making a mockery of the people in power. You can tell by the man’s luxurious clothes, clean nails, and wine glass that this is a wealthy man. In the corner of the postcard on the right, there is a small printed statement–SCHENKER– which means “boozer” in German. 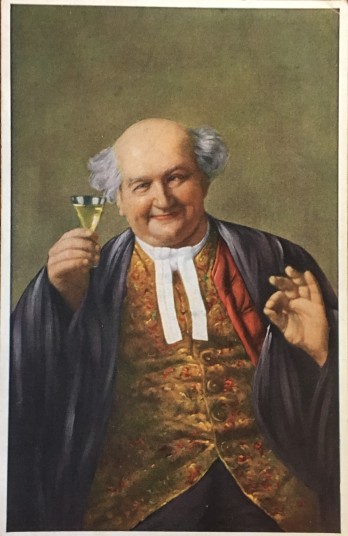 Mockery of those in power has often been used by the common people to make their displeasure known. It can be seen in a lot of German artwork for the period of World War I. Mockery is still frequently used to the same effect in the present day, through its proliferation in memes and social media.

But more often than not, postcards were a quick way for soldiers, sailors, and airmen to connect with those they held close to their hearts.

It is important to understand the sacrifices our military veterans have made.  Today, we honor them the best way we know how—Thank you, for your service and your dedication to our country. 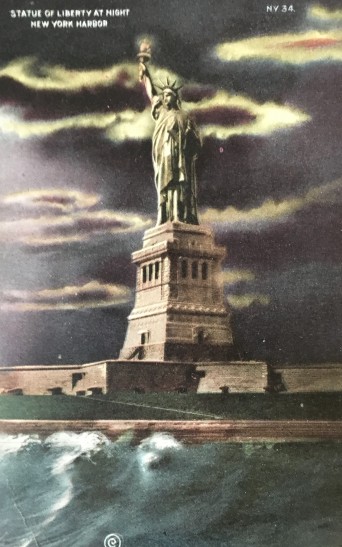 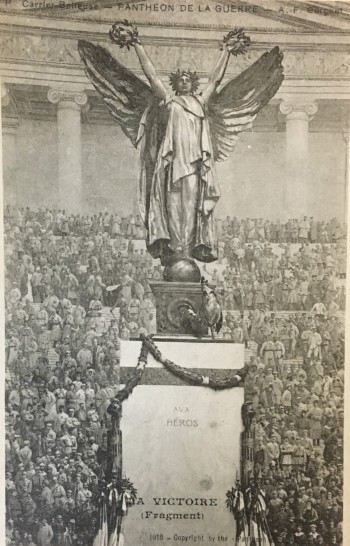