In the mid 1960s, Grand Valley students didn’t have to go far to enjoy winter sports. When the university first opened, a portion of the ravines on the north end of campus was used by students for skiing. The hill overlooked the Grand River making it a beautiful place to visit even outside of the winter months.

As the student population increased, several expansions were added to the ski slope including a tow rope to bring skiers back up to the top of the hill and, for several years, a nearby ice skating rink. In 1967, a few years after students had been using the ski hill, three members of the Board of Control donated $2,500 for the construction of the ski chalet. Construction was completed quickly, and the ski chalet was open for student and club use in March of that year.

Starting in 1966, during the first few weeks of the winter semester Grand Valley hosted the Winter Carnival. This two week celebration of winter made full use of the season with ice carving, skiing, and dog sled competitions. The ski chalet was also used for winter-themed lectures, like President James Zumberge’s talks about his Antarctic expeditions. The ski slope was the central hub of this event bringing the Grand Valley community together.

The ski hill was free for students to use and equipment was available to rent. Occasionally the ski club would section out time for private practice, but for the most part, the hill was a way for students to take a break from classes during the winter months.

After several decades of use, the ski slope was closed and both the ski chalet and tow rope were removed. None of these structures remain today.

When Grand Valley College began, the administration focused on building a successful liberal arts program before implementing any official sports programs. GVSC did offer intramural club sports for students who did wish to join a team. In addition, all students were required to take a physical education course. These physical education classes were mainly just basketball games played inside an old barn on campus property. Nearby fields were used for other physical education activities, while also being used for intramural teams as well, some being football, basketball, softball, track and golf, plus more.

Intercollegiate sports came on the scene for Grand Valley in 1964, with the organization of the first cross country team.  It wasn’t until 1968, however, that women’s sports became a part of the Grand Valley legacy. Joan Boand was a faculty member in the physical education department. She first coached the softball team in 1968, and within the next few years she was also coaching teams in basketball and volleyball. She was given the opportunity to award Donna Sass Eaton the first female athletic scholarship in the State of Michigan for softball in 1974.

The 1980s saw a rise of swimming and basketball for women’s athletics. In 1984, swimming and diving were introduced for men and women for the first time at Grand Valley. Kristen Campbell lead the school being the first person to qualify for the national championship in swim, for both men and women. In 1988, the women’s basketball team qualified and played in the NCAA division II tournament for the first time, although they lost the game.

The 1990s were a time of change for Grand Valley sports. Women’s coach Joan Boand retired, the Meadows Golf course opened, and women’s soccer was added to the available team sports. Joan retired with over 500 wins under her belt coaching the volleyball team to six conference titles. Her legacy was followed by Deanne Scanlon, who continued down the path of success, leading the Lakers volleyball team to a 24-11 record in 1995. To finish up the 1990s, there was an increase in the number of scholarships for women’s golf, along with the first full time coach, Lori Stinson in girl’s golf. In 1999 a new track and cross-country coach was hired, Jerry Baltes. That same year Baltes was hired, the women’s cross-country team placed fifth nationally at the NCAA National Championship.

The 2000s brought only victory and positive change within the women’s sports world at Grand Valley. The volleyball team continued to dominant, advancing to their first NCAA final four tournament in 2001. Although they ended up losing in the semi-final against South Dakota State, the team had made it farther than ever before. Four years later in 2005 the volleyball team qualified again for the national championship, this time held at Kearney, Nebraska, where Grand Valley won its first national title in a women’s sport. In 2006, women’s basketball took home a national championship win as well.

With only about fifty years of women’s sports history, Grand Valley has seen many successful women’s teams. More recently, women’s volleyball won their 17th Crossover tournament in 2015; women’s tennis, cross-country and soccer all won their respective GLIAC tournaments in 2017; and the women’s softball, golf, swim and dive, cross-country and soccer teams all won in GLIAC tournaments in 2019. Not only the teams are celebrating victories, either. Jerry Baltes is also set to receive a 20-year award in 2019 for his time spent working with the athletics program.

In 1962, as construction was getting underway at Grand Valley State College, the administrators vacated their downtown Grand Rapids office and moved into several small houses near the new campus in Allendale. While a small gray farm house was selected as the site of administrative offices, a pink ranch house with a two-car garage was chosen to house the college’s budding library collection.

To prepare for the college’s opening in 1963 Library Director Stephen Ford and his staff of seven worked out of this small house, collecting and cataloging over 10,000 books.

What became of the Pink House is uncertain, but once the college had opened its doors students made good use of the temporary Lake Michigan Hall Library. Still, students and faculty alike eagerly awaited the construction of Zumberge Library to be complete.

Zumberge Library finally opened in the spring of 1969 and served as the campus’ intellectual center until it was replaced by the Mary Idema Pew Library in 2013. GVSU now has five total library locations on its Allendale and Grand Rapids campuses, and holds over 1.6 million titles in its print and electronic collections.

Grand Valley was founded in 1960, and its first classes were held in 1963 on a campus under heavy construction along the Grand River ravines in Allendale, Michigan. Still in its early days, Grand Valley organized a contest to design an official seal. The contest received 60 submissions from nearly two dozen entrants, but the winning logo (so the story goes) was an anonymous design found in the college mailbox with no postmark. The prize money of $100 was donated to the GVSU Scholarship fund. Students voted to select the school colors of light blue, black and white.

The official seal can be found gracing numerous publications, promotional materials, and pieces of stationery in the University Archives. The 1960 date at the bottom of the seal reflects the date of Grand Valley’s founding, not necessarily the date of the item on which it is printed.

Alternate logos, such as the one below, with the “G” and “V” connected side-by-side, also cropped up during the mid- and late 1960s.

During the early- and mid- 1970s, the “GV Leaf” logo, depicted below, graced much of the stationery and promotional materials produced by the institution.

The logo’s designer, W-B Advertising Agency, explained that the smooth flowing line making up the “GV” symbol was characteristic of one large school encompassing a number of smaller colleges within. The tree or leaf-like symbol in the center is symbolic of ecology, rural setting, rebirth, and growth.

College of Arts and Sciences Logo

The most traditional of Grand Valley’s four colleges, the College of Arts and Sciences, or CAS, had curricula covering a wide spectrum of disciplines in the arts, humanities, and sciences. This spectrum is symbolized below in the logo that included a rainbow-like arch over the CAS initials.

The William James College was founded in 1971 and was organized under a philosophy of trans-disciplinary liberal education that emphasized critical thinking and personal fulfillment. Named after the famed American psychologist and philosopher, the college’s logo depicts a portrait of a young William James. This logo can still be found painted prominently on the wall of Lake Superior Hall, the building in which the college was housed.

Though it began in 1968 as the College of General Education, it eventually grew and evolved into an interdisciplinary liberal arts program that was focused on bringing students “into contact with themselves, their personal and academic needs, their capacities, their values, their aims in life, and to help them integrate these elements into an effective whole by providing the necessary opportunities and resources. The college was housed in Lake Huron Hall.

College IV provided an individualized, modular, self-paced, and interdisciplinary curriculum intended for goal-oriented students who didn’t fit into traditional modes of education.  Instead of classes or lectures, students learned through module books and video tapes that could be checked out of the College’s A/V Center.

In the early 1980s, Grand Valley disbanded the cluster colleges and reorganized with discipline-based academic divisions. Check back later for an exploration of Grand Valley Logos in the 1980s and 1990s! 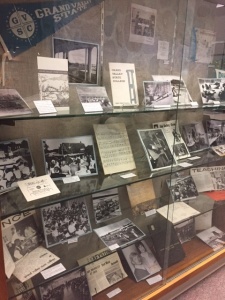 On June 24th, Grand Valley State University welcomed back members of its first graduating class. Members of the Class of 1967 returned to campus over the weekend to celebrate the anniversary of their graduation 50  years ago.

The Class of 1967 took a chance on the “college in the cornfields.” The 138 students who made up the class (including “pioneer” members who enrolled in the very first year, rather than transferring in later) knew a very different campus from today’s. While the Great Lakes Plaza remains a central academic hub, the size and scope of campus has greatly expanded.

As part of the weekend’s festivities, Special Collections and University Archives toured groups of the alumni through Seidman House. 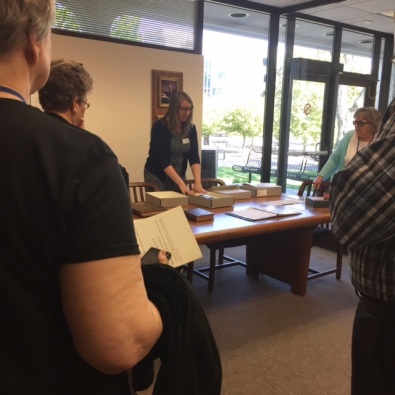 Archivist for Collection Management, Annie Benefiel, displayed notable items from our collections, while Archivist for Public Services and Community Engagement, Leigh Rupinski, showed them an exhibit of 1960s photographs and documents.

Students sitting on a balcony of Lake Michigan Hall 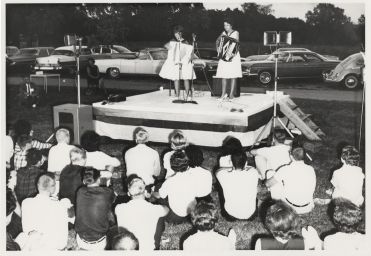 Alumni were particular interested in the changes to Seidman House itself. Back in 1967, Seidman House was the “Collegiate Center”. It served as a student union, complete with bookstore downstairs. Although the “pit” (where performers like Arlo Guthrie entertained student crowds) remains, its primary purpose now is as a quiet study space for students. Instead of a bookstore, the downstairs houses our climate-controlled stacks.

In the evening, staff attended the “Hootenanny” (party), where we manned a table of 1960s memorabilia drawn from the Archives. Items included yearbooks, student handbooks, the 1967 Commencement program, and course catalogs. Alumni eagerly flipped through memory books to help us identify unnamed faces in our photograph records.

We were thrilled to be a part of the Reunion festivities!